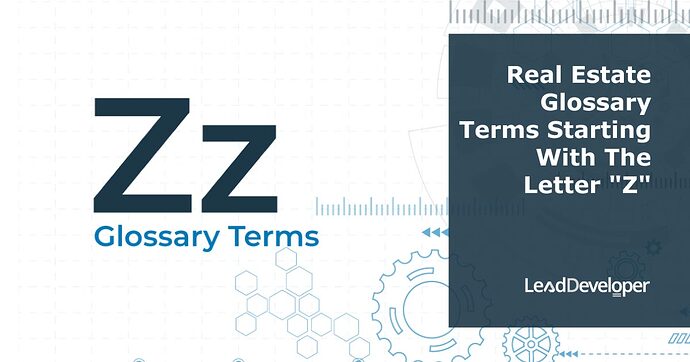 A flashing made of galvanised metal to stop water from entering the house through the horizontal gaps between plywood siding sheets.

The point immediately overhead to an observer for any place on Earth.

A different term for dry ice.

Structures placed so that one of their sides touches the lot line directly are referred to as “fronting” on the lot. However, setback ordinances in many areas generally prohibit such construction unless it’s part of a special space-conserving project.

A style of cluster housing construction where individual homes are positioned on distinct platted lots. They could be bound together, but that’s not a guarantee.

A piece of residential real estate where the building is very close to or touches the property line.

A solid or dry concrete that has no discernible droop after the cone has been removed.

A space or area of a building that needs concentrated cooling to maintain the proper temperature.

Demolition and clearance of entire areas in order to make way for new construction, particularly in slum clearance projects.

A particular kind of thermostat-operated valve that is put next to a cooler or heater. used to regulate the hydronic systems’ distribution of water and steam to various portions of the structure.

The act of only heating or cooling a portion of a building, as opposed to the complete structure, where occupants spend the majority of their time.

Land use guidelines are often developed by local government entities.

the process by which local governments or planning bodies regulate the use of land.

Local governments classify and regulate land based on use classifications (zones), which frequently include density designations.

Property structures and uses are regulated within designated districts or zones. Zoning laws are enacted in the exercise of police power and are enforced for as long as they reasonably protect an area’s public health, safety, morals, and general welfare. Due to the lack of national zoning standards, counties and/or municipalities generally enact their own zoning ordinances in accordance with a state enabling act. Zoning laws are typically enforced through building permits, which must be obtained prior to constructing on a parcel of land. A permit will not be issued unless the proposed structure complies with the permitted zoning, as well as other requirements such as the implementation of a master plan. Where there is a conflict between zoning and private restrictions, the more restrictive must be followed.

Because rezoning usually requires the passage of a special ordinance, requests for rezoning may have to be directed to a special zoning appeals board or other administrative body.

Property buyers must be aware of the zoning requirements; that is, zoning regulations do not render the title unmarketable where they differ from what the buyer expected. As a result, the broker is responsible for determining whether the proposed use of the property complies with existing zoning. However, zoning violations render the title unmarketable. When the zoning only allows for single-family dwellings and the seller owns a duplex, the title becomes unmarketable unless the buyer agrees to accept the title under those conditions. Additionally, if either the seller or the broker misrepresents the actual permitted zoning use, the buyer has the right to cancel the transaction.

Where zoning changes (for example, from urban to conservation) lower property values, the state is not obligated to compensate property owners fairly (as it is when property is condemned under the power of eminent domain). The following are some examples of special zoning:

A governing authority’s act that regulates the purposes for which property in a certain region may be utilized or developed.

A technique used by a governing body to limit the legal usage of a specific area within a map of property.

Legally defining land use or land use categories through the designation of specific areas within a jurisdiction by a local planning authority.

Zoning districts are depicted on a map of the state.

The government’s designation of geographic regions in which specific types of structures and companies may be built.

A document approving a certain land use and objective.