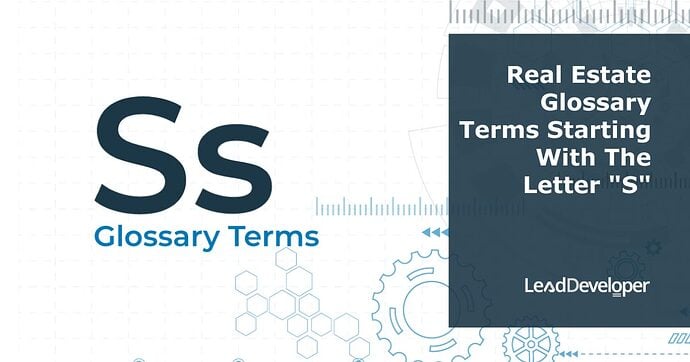 A platform located between flights of stairs or at the bottom of a flight of stairs.

The distance up and down between steps.

A set of universally agreed-upon codes used by governments and businesses for recording and accounting purposes, classifying economic and employment activity by sector.
Standard practices of the trade

A word used to describe the most basic and bare-bones requirements for building construction.

A standing mortgage is one where only the interest is paid and the principal doesn’t go down over time.

At the eaves, asphalt roofing is put to provide protection by filling in the areas under the cuts and joints of the first course of shingles.

A vent that does not have a fan.

Reasonably inferring something about a larger statistical population based on a smaller sample of that population (and stating how likely it is that the statement is true) (in probabilistic terms).

The sum of all parts; the group of people or things considered in a survey or study. Simply put, the members of a given group make up a population, which is a complete set of all possible individuals in that group.

The amount of sound that can be stopped by ordinary noise.

Before the concrete foundation wall is poured into the foundation panels, it is inspected.

A method for applying flashing where a vertical surface meets a roof with a sloped plane.

A lease in which the rent paid by the lessee increases at regular intervals by a predetermined rate or dollar amount. A step lease is a means for the lessor to hedge against inflation and future maintenance or operational expenses.

A straight piece of framing in a panel door.

The flat moulding went over the window sill between the jambs and touched the lower sash’s bottom rail.

A cast-iron pipe with a lid that shuts off the water to a property in case of an emergency.
Stop order

A formal, written notice to a contractor that some or all of the work on a project has to stop. This could be because of safety violations, bad materials or work, or because the contract has ended.

A device put in a water supply pipe, generally near a fixture, that allows an individual to turn off the water supply to one fixture while keeping the rest of the system operational.

Moldings are added to the inside of a door or window frame. Also, the valves that turn off the water supply to a fixture.

A second window that helps keep out cold weather even more.

A network of pipes that is made to collect rainwater and keep it separate from the waste water system.

The space between any two floors or between the floor and the roof of a building.

Easily navigated GIS programmes that can be used to plot points of interest like stores and other commercial establishments based on their street address.

The plate on the door frame that engages a latch or dead bolt.

A piece of wood or another material that holds up cross beams in floors or ceilings. The part of a stair that holds up the treads.

Wooden flooring made up of narrow, matching pieces.

A wood-framed floor that was put in as a basement floor.

To persevere, or to push one’s self.

A finish on the outside of a building that is made with Portland cement.

A construction technique that distributes structural loads to a number of comparatively lightweight studs.

A vertical stud is reinforced with a metal structural bracket.

The sill plate, floor joists, and deck sheeting are the parts of a floor’s frame. A finish floor will be put on top of these.

A provision in a cooperative housing contract that states that the agreement is contingent on the buyer securing financing from a financial institution in an agreed-upon amount.

When the owner of an apartment or the person who has the main lease decides to rent the apartment to a subtenant, this is called a sublet.

A form of mortgage that is typically granted to customers with poor credit.

Factors or forces that affect the availability of a commodity or service in a market.

Sectors of the economy providing inputs to production processes or supporting the distribution and sale of intermediate or final goods.

A ceiling system that is held up by the structural framing above it.
Suspended losses

If you have a passive loss that you can’t use this year, you can put it on hold and use it next year or when you sell.

Angled supports are put up to keep a wall from falling over.

A piece of electrical equipment that connects or breaks a circuit.

A set of procedures for examining a system’s parts and how they work.