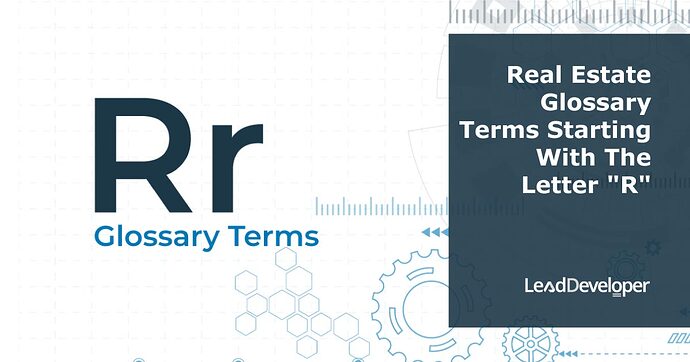 A procedure for nonuniformly adjusting characteristics of a digital geographic information system layer; “from” and “to” locations are used to describe the adjustment.

A rule made by the Securities and Exchange Commission (SEC) as part of the Securities Act of 1934’s rules against fraud. When buying or selling a security, it is against the law to use tricks, make false or misleading statements about important facts, or do anything else that could be seen as fraud.

Even if a private or intrastate offering of securities doesn’t need to be registered, the issuer is still subject to the antifraud provisions of both federal and state securities laws. In other words, if the issuer didn’t say something important, the person who bought the security would be able to get their money back plus interest from the date they bought it.

A rule that the Securities and Exchange Commission (SEC) put in place in 1974 to make it easier to figure out when offers or sales of securities are “not involving any public offering” and therefore don’t need to be registered. For example, the act shouldn’t apply when there is no public offering. It also talks about whether or not the consumer needs the protection that the Securities Act’s disclosure rules offer.

Rule 146 lets anyone who is “rich and smart” make an offer, as long as the issuer knows ahead of time that the person making the offer is knowledgeable (smart) enough about real estate investments to evaluate the risk themselves, is represented by an independent adviser with such experience, and has enough money to handle a loss. The rule limits the number of sales (not offers) under $150,000 to 35. Sales above that amount are not limited. All buyers must sign a written statement that they are only buying to invest and not to resell.

A rule that the Securities and Exchange Commission (SEC) made in 1974 to make it clear that a security doesn’t have to be registered with the SEC if it is being sold in the same state or in the same city. The rule says how to figure out who lives in a state, especially when it comes to legal entities like corporations and partnerships. If a local issuer wants to raise money for a local project but has a lot of assets (like real estate holdings) in another state, it might not be exempt. The rule also says that exempt securities can’t be sold to people who don’t live in the issuer’s state for at least nine months after the issuer’s last sale and receipt of all money from any part of the securities issue (“coming to rest”).

A rule of law that says a future contingent interest in real property must become valid as soon as possible. This keeps the property from becoming unsellable for long periods of time. The effect of the rule is to get rid of future interests that make it hard to get property rights for longer than the required time, which is usually no later than 21 years after the interest was created. For example, if a property is given “to George Allen for life, then to his son Butch Allen for life, and remainder to Butch’s children who reach age 24,” the remainder does not follow the rule because it is possible that the remainder will not become valid until after 21 years of some life-in-being. For example, George and Butch could die when Butch’s only child is one year old. The rule only applies to interests that could change.

In finance, there is a rule of thumb that says the interest rate at which a single sum will double can be found by dividing the number of years the money is growing by 72. Example: A banker would use this formula to figure out how much the money has grown over eight years: 72 + 8 = 9%. If the money grows at a known rate, say 9%, the investor can figure out how long it will take to double: 72 years plus 9% = 8 years.

Under the truth-in-lending laws, the creditor must explain how any unearned part of the finance charge is calculated if the debt is paid off early. The Rule of 78s is the name most creditors give to their way of giving rebates.

Benchmarks are shorthand terms that are used to make investing judgments. Gross rent multipliers and the overall capitalization rate are two common examples.

Run with the land

A phrase that refers to rights or agreements that bind or help each new owner of a piece of property. One example is a building restriction in a recorded deed that would apply to all future owners. Unlike an easement in gross, an easement appurtenant stays with the land and goes to the next owner even if it’s not in the deed. For example, the covenant won’t stay with the land if the grantee agrees, as part of a deal, to fix a building on land that the grantor, Leonard, owns. This is because it only gives the grantee a duty. The promise has nothing to do with the land that was given from the grantor to the grantee. It is just a personal promise for the benefit of the grantor.

The movement of water from the land as both surface and subsurface discharge; surface discharge in the form of overland flow and channel flow in the more restricted and common use.

Zoning that permits landowners to use their land to grow crops or raise livestock.

A classification of land use that has to do with rural areas, as opposed to cities; land used for farming.

A federal agency within the United States Department of Agriculture that makes loans for housing in open country, all rural communities with populations under 10,000, and most towns with populations between 10,000 and 20,000 that are outside standard metropolitan statistical areas (SMSAs) and have a severe lack of mortgage credit.

Various credit programmes are available to assist in the purchase or operation of farms, the creation of new employment and business opportunities, the improvement of the environment, and the acquisition of homes. Most programmes are divided into two categories: guaranteed loans (made and serviced by a private lender and guaranteed for a specified percentage by the FmHA) and insured loans (made and serviced by the agency). Discounts or points are not permitted with these loans, and eligible veterans are given preference.

Having to do with those areas outside of cities but close to them where land use is changing from rural to urban.