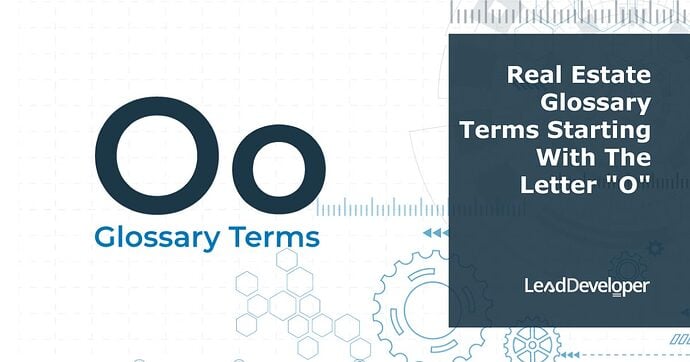 Studs, rafters and joists are measured from the centre of one to the centre of the next in a building to determine the spacing between members.

Adhesive-backed wall covering manufactured by sprinkling sawdust on top of a sticky base.

Alluding to the fact that things have become inadequate, unused, obsolete, or nonfunctional as a result of the passage of time, shifts in customer preferences, or general deterioration through time (a factor considered in depreciation to cover the decline in value of fixed assets due to the invention and adoption of new production technologies, or changing consumer demand).

As defined by building codes, this phrase describes a building’s permitted use.

Having control over something. Taking it with your hands and living there as a tenant or owner.

The amount of money the tenant paid to use the space. It can be shown in either dollars before or after taxes.

What percentage of a given market’s office space needs are actually being met by existing office buildings, broken down by property type, submarket, sector, or user categorization.

A type of commercial property that is used to run or live in business or professional offices. Usually, management and staff operations are done on these kinds of properties. Office can mean a whole building, a floor, a part of a floor, or an office park. Generic office space is sometimes used to describe office space that can be used for many different things. Class A, Class B, or Class C describe the type of office building. Class A properties are the most modern in terms of how they work. In the same market, Class B and Class C properties tend to have lower rents because they are older and need to be updated. They might not be as useful or efficient as Class A properties because their design or condition makes them hard to use.

One or both legs of a hinge with a 90-degree offset, which is designed to change the door’s pivot point.

A building constructed in multiple locations other than the one intended for its intended use.

Unlike auctions held at the auctioneer’s home or in auction rooms, these auctions are held on the property that is being sold or on the items that are being sold at the owner’s home.

When more than one agent can try to sell the seller’s home.

An engineer inspects the hole in the ground and analyses the soil to determine what sort of foundation should be used.

A refinanceable mortgage that does not necessitate a new mortgage contract.

Without an expiration date, this contract is between a seller and a real estate broker.

The total amount of money paid for a property, including the amount of cash and debt.

The whole amount due on a mortgage before any payments have been made, in this case the principle.

Any building on a certain plot of land that is not the main building. For example, a garage, a shop, etc.

A rafter that extends beyond the wall’s framing. Cornices and roof overhangs are often formed by attaching a smaller rafter to a bigger rafter.

The place where two walls meet and form an exterior angle, one that is usually walkable.

The sale of a home in which the seller provides all or a portion of the financing to the buyer.

The right to own and use property without anyone else being able to do so.

Ownership of a property that is owned solely by one individual.

A way to get full economic use of a property for an unspecified amount of time by buying a stake in it.